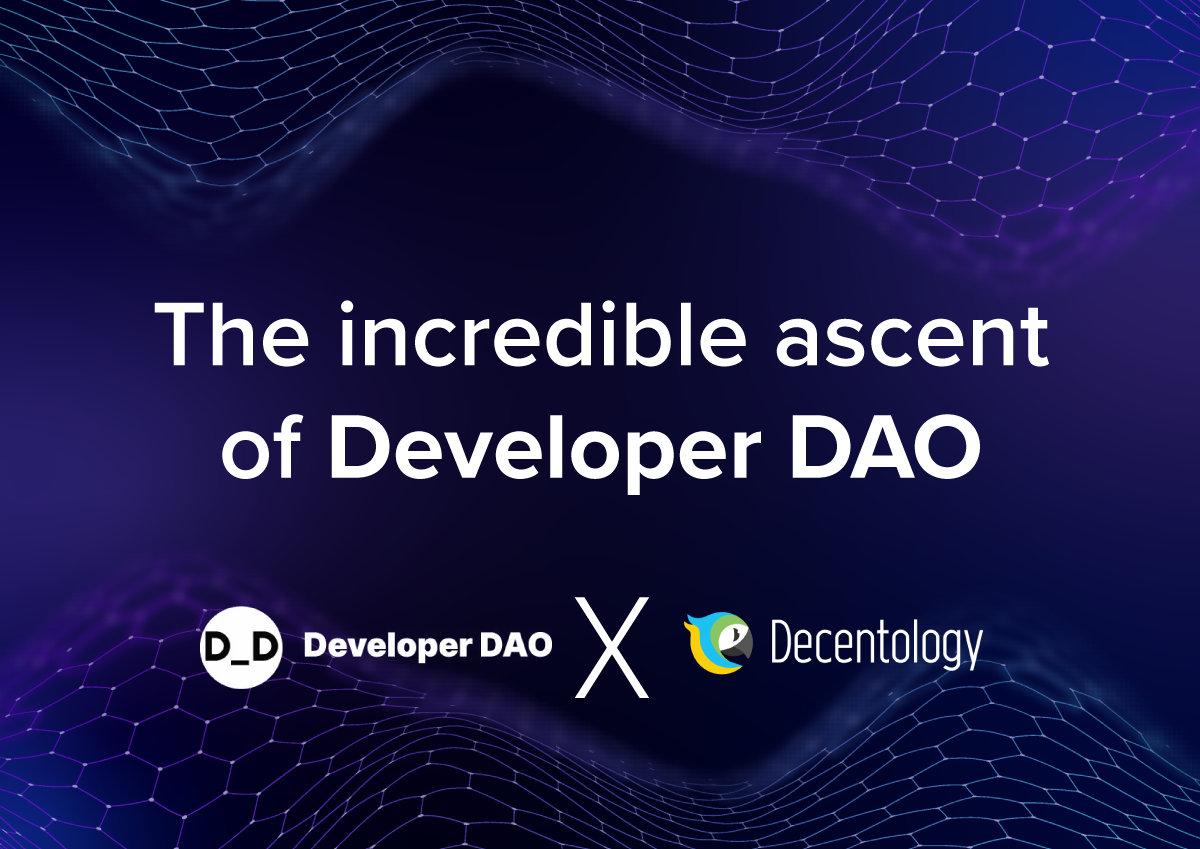 The incredible ascent of Developer DAO

With Nik Kalyani and the Developer DAO team

On February 28, we at Decentology had a fun and illuminating chat with the guys at Developer DAO about their genesis, and more importantly, their ongoing web3con event.

Featuring Decentology CEO and founder Nik Kalyani, the Twitter Space put the spotlight on the Developer DAO team, including:

- Will Blackburn, founding and core team member at Developer DAO

In case you missed the session, fret not! We’ve got you all covered. Here are some of the talking points from this week’s episode:

But first, an introduction

Developer DAO, for those not in the know, is a community of people who are interested in participating, learning, and contributing to the future of web3. Learn more about the DAO here.

web3con — organized by Developer DAO and sponsored by Decentology — is a conference for builders by builders, and is on until February 6. Find more details about the conference here.

The Developer DAO members shared some of their key milestones — from a personal standpoint and that of the DAO itself:

Rahat: The biggest thing that Developer DAO has been able to achieve is to show people how to take their curiosity for all things DAOs and turn them into contributing members of the DAO — and this is not just for those who like writing code etc. To go from a chaotic Discord group to seeing so many sub-groups emerge that are actively contributing to the DAO has also been amazing.

Orlundo: The first town hall, just the atmosphere and seeing how many people actually came. And then continuing to see Developer DAO grow and seeing how many people are becoming engaged and actually excited about what we are doing and what the possibilities could be. And another key milestone that, of course, hasn't happened yet, but is almost upon us — It’s the web3con. The effect that this conference is going to have on the Web3 space, it’s going to be another one that we'll look back on and be super proud of.

Narbeh: An early milestone, especially with developing the site, was the moment where we actually sold out of the membership NFTs. Prior to that, we had this little debate inside the DAO of how people could actually mint these NFT's and how to simplify the process. On the one side, some of the folks were arguing for keeping it down to those who are “hardcore” and knew how to mint from the smart contract. And then there's another group that was for introducing an easier means to allow people to mint because minting from a smart contract isn't the most intuitive thing. So, we decided to build a nice user interface for new users, especially Web2 users coming into the space. And then, interestingly enough, one week after releasing that feature, we sold out immediately. So that stuck out as a milestone moment.

Camila: My experience with Developer DAO is a little bit different than all the other speakers up here. A lot of these speakers have been our core members, who've been deeply involved since the beginning. I'm kind of on the inverse. I have been a member of the DAO since its inception, but I was never really involved. I kind of joined because it sounded cool. But when I met a few people at Eth. Denver, something really clicked for me. And I was like, “Wow, this community is full of really amazing people.” So yeah, I'm a little bit different than the rest of the crew in that sense, but one milestone for me actually, is that we have a lot of Web2 developers joining the DAO and a lot of Web3 curious people that don't exactly know how to get started. There's a lot of noise out there. So for me, a personal milestone is to kind of focus on developer education within the DAO and be a resource for developers who are getting started.

Rahat: So I had been toying with the idea of doing some local meetups in New York. But as I was looking into that, I realized I could do this for a wider audience. So I put the idea to Nader, and asked him what he thought about me putting forth this idea in the DAO and putting together a team to work on this. And he was immediately on board and was supportive and that gave me the courage to go ahead and make the announcement. And it was really awesome to have Nader as a mentor and really pushing you to take ownership of the stuff. And for a lot of us, this event is a first-time experience. But we all took parts of the organization that we knew how to do well based on our skill sets. So everyone was just contributing what they were really good at and we just took everybody's skills and meshed them together to organize this and we’re super happy with everything that's been coming up so far.

- Be a gathering point for different Web3 communities to come together and share information.

- Be open to everybody — not just DAO members.

- Educate the next wave of Web3 developers.

- Help women take the first step to build on Web3.

- Shape the developer experience of the future.

We loved bringing you this Twitter Space session and look forward to catching you on the next one!

As always, to continue this conversation, join us on the Decentology Discord.