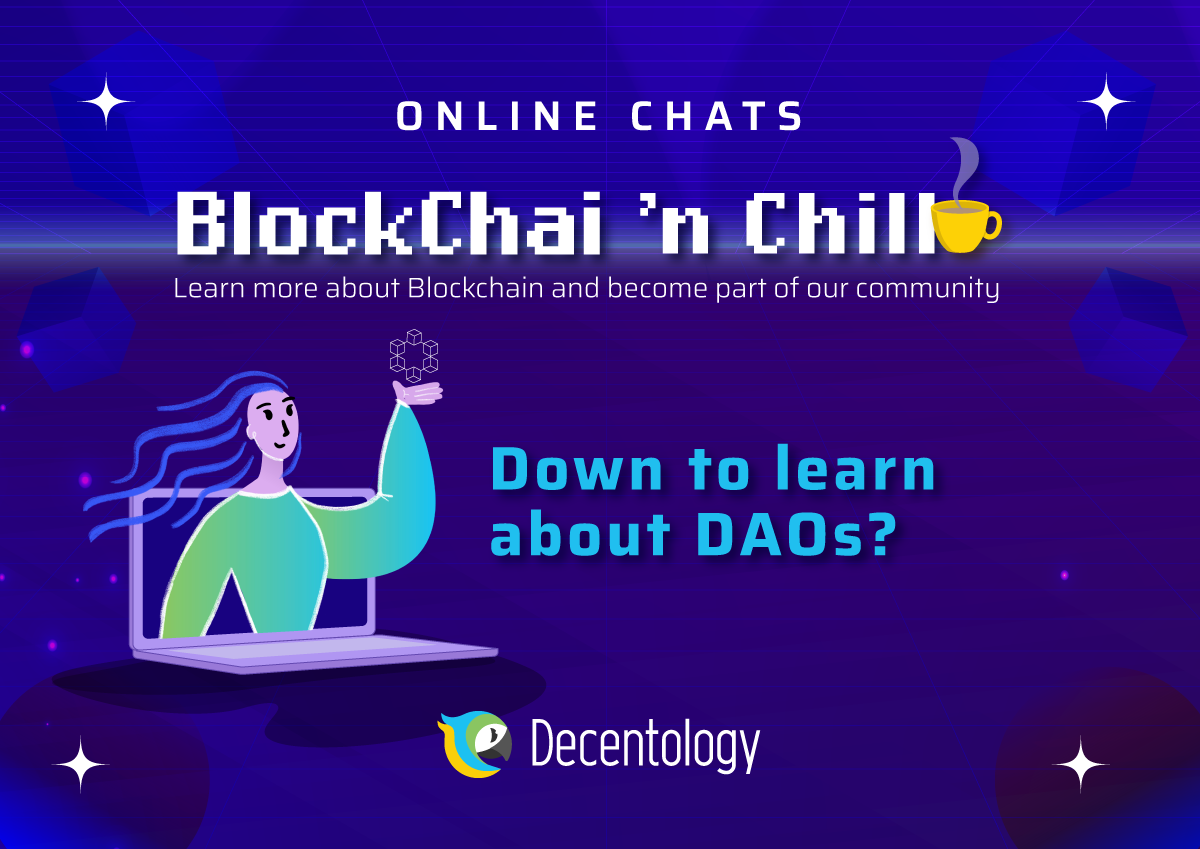 DAOs: Everything you need to know about Decentralized Autonomous Organizations

In our third and most in-depth session of BlockChai ’n Chill, we took a deep dive into the world of DAOs.

Featuring Decentology CEO and founder Nik Kalyani and co-founder Chase Chapman, the freewheeling conversation takes a thorough look at the basics of DAOs, what they look like today, how they have drawn parallels with open source communities and what they could look like in the future.

In case you missed it, we’ve got you covered. Here are some of the thought-provoking insights we discussed:

DAO stands for Decentralized Autonomous Organizations. While the acronym in itself does very little to explain what those actually are in practice, DAOs are based on a simple and familiar concept: Companies owned by the people who create value. They're basically co-ops, which means all the employees are also the owners. That's how the company is governed.

Two essential concepts separate a DAO from a traditional company:

How do you evaluate whether an idea is DAO-worthy?

It has also been difficult for some DAOs to find product-market fit currently because you're trying to create value and move really quickly as a decentralized organization.

Why? Because the DAOs tend to overemphasize ‘decentralized’ and ‘not distributed’.

Decentralized = Anyone can do anything they want.

Distributed = Trusted parties who have been chosen by a decentralized group who can do the things that we've decided they're allowed to make decisions on.

So while eventually, that will evolve, it's certainly harder now.

DAOs are also one of the best solutions for open source because Web 3.0, in general, is a really interesting space for open source. What Decentology is doing with the Hyperverse is a perfect example of this. Being able to monetize different layers of that and have owners instead of having a big company like Facebook come in and subsidize the whole thing is incredibly important.

Every DAO has a few key things:

And then from there, you start building like you would in a startup, where you begin with simple practices. It is imperative to choose how you want to go about these conversations and how you want power to be distributed. I feel like people start off by designing all these crazy complex governance systems. One of the biggest learnings from self-managing organizations is to start its MVG (minimum viable governance), and then build on top of it as you need it. And instead of laying out every process you could ever imagine, see what people do and then codify it.

Parallels between open source and DAOs

People who have been in large scale open source communities can relate to DAOs because the models are very similar and there are two factors: It is about what you contribute and it is transient.

For example, in open source communities, you don't assume that someone's going to be there all the time. Life happens and they go away for a few months, and you don't look at that negatively. And then there's recognition for what you've done or contributed. So there are a lot of parallels.

On the flip side, as open-source projects mature, the friction for onboarding new users becomes more intense and cumbersome, which creates burnout. For example, before, if someone found a bug, they would just submit an issue and it’s handled. Now you've got these two-page forms you have to fill out for a single issue. And the friction becomes so big that people just don’t want to contribute.

And DAO-related burnout is a concern as well, which brings us to our next topic of discussion.

Tips to avoid burnout and start a successful DAO

The key is to build organically and start small. Don’t try to fit into the mound of other DAOs that you’ve seen. Keep it simple.

The most important thing when it comes to governance is distinguishing between the governance of a system of nodes that are differentiated versus not differentiated. The genesis of blockchain technology was Bitcoin. And the interesting thing about Bitcoin and the way that it essentially does governance is it comes to a consensus using cryptographic proofs. So it's like math. And because it's math, and because it's nodes in this network that are very similar, what has emerged is consensus-based governance. Because if every node is an agreement then it means that the math is correct. No single node is better at math and understands the proof more than others. And so there's no need for different types of governance.

But when you get into areas such as compensation, it becomes much more complicated because everyone has different opinions. And in other situations, like with decisions pertaining to what products should be built, some people actually might have a better understanding of a market than others. And so you not only have these different opinions, but also different amounts of value that each given person is adding to a network. And it's really hard to assess how much value a given person is adding. And as you add human layers, you start to get a lot more complexity in governance.

What's interesting in DAOs today is that we've inherited a lot of the consensus-based governance of fully decentralized networks like Bitcoin and Ethereum. And the problem with doing that is that humans are not like that.

And that's when at a DAO level, we start to define, for example, what does product mean? And what are the decisions that are being made within the product? Among those decisions, what do we want to delegate to whom? And what is the scope of that delegation?

And so, at the basic level, we are starting to think about governance. Now, of course, you can get funky with it, because each individual unit can have its own version of governance, depending on what it looks like for them. But, essentially, what all that boils down to is, what mechanism do you use to make decisions as a consensus? Is it consent? Is it just quorum? What is it and who is making those decisions? And when you boil it down to those two things, it just becomes much less complicated.

How should compensation work in a DAO?

The future of compensation in DAOs should be based on a concentric-circle model of contributors.

First, you have the outside circle of people who are in the community, attend events but don't really do a lot else.

In the circle inside of that, you have people who are more committed community members who want to answer questions and want to help do certain tasks. Those are the types of people you probably want to pay per each task that they're doing.

And then as you get into the innermost circle, people take on more responsibilities. And what that really comes down to is a commitment that they're making to the DAO but also that the DAO should be making to them on a compensation level. And if there's any commitment on either side, there should be more filters to make sure that the fit is right.

And so as you get closer and closer in the circle, it should be more and more 'permissioned' — not based on what a single individual thinks, but a smaller hiring circle that is chosen by the entire organization to make hiring decisions.

The mechanics behind running a DAO

Q: As things stand, the autonomous part of DAO is not completely autonomous right now. Beyond the tokens themselves, there is zero smart contract stuff happening. All the voting etc. that we talked about earlier is happening off-chain. So what are some of the tools being used right now? Walk us through how a governance action occurs.

One of the most popular tools today is Snapshot. A few DAOs have their own voting tools like MakerDAO, which is one of the oldest. So Snapshot has officially announced that they're working with Starkware, which is a layer two blockchain and they're going to be offering on-chain voting through something called Snapshot X, which is pretty cool. But it's much cheaper or free because it's using Layer Two. So we're definitely moving towards taking voting and putting it on-chain.

But generally, the way that voting works in DAOs is, if you're proposing something, you probably want to have been in the community for a while, not unlike an open-source community. For example, a pull request is one thing, but if you’re going to be like, “I'd like to change our entire system,” it's definitely not a day one feat.

The current system of voting that we see in DAOs is quorum-based voting.

The way that it tends to work is a member of the DAO or someone who's in the community has seen some tension that exists and has a proposal. That tension could be not something that's actually a tension but something that exists that creates a way for a proposal. Oftentimes, they're writing up that proposal, sharing it with members of the community who are influential and have a lot of context on that specific thing, which is really important. You share it with the community, see what they think, get that feedback, make changes, and then do an official vote on it. If the vote passes, that often means that it goes into effect. Boom! You're done. Oftentimes, a lot of these things get stuck in a feedback loop. So when you do this kind of voting, you usually need to reach a quorum, so you need to have at least 30 percent of outstanding tokens, let's say as an example, to participate in the vote. Whichever side is the majority, that's what passes and it's done.

In another system, which is consent-based voting, what happens is you have someone who sees a tension and creates a proposal, they get anyone who is in the scope of that proposal together and gets judgment-free feedback, which is just saying, “This is how I feel when I see this”. And then saying, “This is what would make it interesting to me”. And the core question that you're asking is not should we do this thing? Actually, does this feel safe to try? And by asking if it feels safe to try, you move away from this tendency for democratic systems to get nothing done and change. And instead, you move towards experimentation and iteration, which is much more interesting.

Thanks for reading along this far. Head to the recording to get the full scope of the conversation, there Nik and Chase also cover topics like:

We loved bringing you this BlockChai ’n Chill session and look forward to catching you on the next one!

To continue this conversation join us on the Decentology Discord.